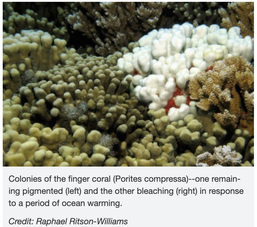 Coral bleaching is a cellular response brought on by environmental stress that results in the breakdown of the symbiosis between corals and their endosymbiont algae.  Hawai'i and reefs across the world were affected by ocean warming brought on by a record-strong El Nińo event in 2014-2016, causing a global coral bleaching event. However, some corals are resistant to thermal stress and we wanted to understand more about the differences between bleaching sensitive and bleaching resistant corals.

Our research sought to determine how corals that bleached and those that did not responded to thermal stress (and their eventual recovery from stress) and whether these responses different across reef environments. We found that coral biomass was very important in the response of corals to stress and that bleaching reduced this important energy reserve. However, corals were able to utilize this tissue during recovery and re-built tissue reserves quickly following temperature stress.  These results show that coral tissue are important in the bleaching and recovery of corals and that bleaching resistant corals can maintain their soft tissue energy reserves in the face of temperature stress.
​
You can access our paper at Limnology and Oceanography, data on github, and read more at Science News Daily
New publication: Urchins and divers working together to reduce invasive macroalgae on coral reefs
Neilson BJ, Wall CB, Mancini FT, Gewecke CA. (2018) Herbivore biocontrol and manual removal successfully reduce invasive macroalgae on coral reefs. PeerJ 6:e5332 https://doi.org/10.7717/peerj.5332​
​
June 2018: IsoCamp! University of Utah course in stable isotope biogeochemistry  ecology

I had the pleasure of attending the University of Utah at Salt Lake City as a 2018 IsoCamp cohort with the SIRFER Lab (Stable Isotope Ratio Facility ​for Environmental Research).  This course is amazing--it offered the fundamentals of stable isotope theory and ecology as well as insight into cutting edge applications of stable isotopes. Plus I got to meet some real legends in the field of stable isotope ecology. I can't sing enough praises for this course, its content, faculty and resources.

​I am honored to have been rewarded The Denise B. Evans Fellowship in Oceanographic Research from the UH Mānoa School of Ocean and Earth Sciences and Technology.  This is a tremendous honor, and I look forward to using this opportunity to further my research on the balance of autotrophic and heterotrophic nutrition in reef corals. Mahalo nui loa!

April 2016:  I am marine science and you are too! Science outreach and education for middle school students
April 2016:  Coral science at the 41st annual Albert L. Tester Symposium
​This last week, the University of Hawai'i at Mānoa and the Biology Department hosted the 41st annual Albert L. Tester Symposium.  This symposium is a great opportunity for undergraduates and graduate students to showcase their research to the department and the school as a whole--plus everyone has a chance to finally hear (succinctly) what exactly their colleagues have been up to!  I presented on my research on the interactive effects of ocean acidification and light on reef coral tissue energy and growth.
​
The Gates Lab had a very strong showing-- with talks ranging from education and communicating science, to coral bleaching and reproduction, and interactive effects of climate change with other environmental stressors.  Many of the presenters will be attending the International Coral Reef Symposium in June, here in Honolulu. If you missed us at Testers, hope to see you at ICRS!
April 2016:  Gates Lab research covered in The New Yorker
February 2016: Sunscreen effects on coral reefs

December 2015:  Education with O'ahu's School for Examining Essential Questions in Sustainability (SEEQS)
​
November 2015:  University of Hawai'i Hilo launches the "Coral Reef Health Atlas"
​
Hawai'i is a very special, and isolated, coral reef ecosystem.  Isolation has provided Hawai'i with coral reefs filled with endemic species found nowhere else in the world.  However, globalization and a growing population have led to many introduced species giving Hawai'i the nickname the "extinction capital of the world."  Further, diseases on coral reefs have caused a decline in the abundance and health of coral reef.  The Hawaiian Archipelago is a massive island chain! With islands and atolls spanning more than 2400 kilometers!  To share and communicate the science of coral reefs with the public, the University of Hawai'i at Hilo--along with a graduate student in the Gates Lab--has built an amazing educational platform: The Coral Health Atlas.

"The Coral Health Atlas provides easily accessible data, immersive visual displays, and general information for study sites throughout the Hawaiian Archipelago. We hope to promote a global understanding of the importance of healthy coral reefs in order to protect and conserve these precious ecosystems."

Take a look and see for yourself!!

This week Huffington Post Green c/o Craig Musburger featured an article on coral bleaching and the persistent threat ocean warming poses to reef corals (article: "How to Train Your Coral").  Ocean warming leads to the breakdown of the coral-algae symbiosis and causes corals to appear white or "bleached".  Severe bleaching can have severe effects on corals and may result in widespread mortality and local extirpation of corals.  However, some corals are resilient to bleaching stress. Our laboratory is currently studying factors contributing to stress resilience in corals using a variety of cutting edge techniques, including confocal microscopy. HD under H2O produced a video with Dr. Gates discussing her research and the recent warm-water bleaching event in Hawai'i--all in HD!  Check out the video below to learn more...

How to Train Your Coral from HD Under H2O on Vimeo. 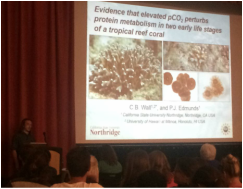 This month was the University of Hawai'i at Mānoa 40th Annual Albert L. Tester Symposium, and I presented results from my most final master's research publication (left): "Evidence that elevated pCO2 perturbs protein metabolism in two early life stages of a tropical reef coral."  In addition, three Ph.D students/candidates from the Gates Lab presented research: Elizabeth Lenz (on her octocoral research in St. John, US Virgin Islands), and Raphael Ritson-Williams (effects of the 2014 bleaching event on the corals of Kane'ohe Bay).  There were many phenomenal talks from graduate students across the College of Natural Sciences and many great posters, as well!

As usual, the symposium was a blast, and we were honored to have the keynote address of Dr. Jeremy Jackson. Additionally, Raphael won Honorable Mention for best paper presentation for his talk!  This work was done in collaboration with Dr Gates, Dr. Laura Nunez-Pons and myself--although the eloquence of the presentation was 100% Raphael!  The man has analogies for coral bleaching in spades!
CONGRATS RAPHAEL ON A JOB WELL DONE! You can learn more about Raphael's research at his website.